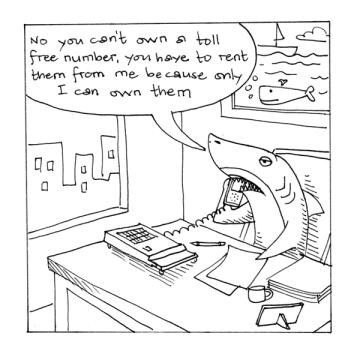 When I first started in the Tollfree business a lot of people were renting vanity numbers. I used to have to warn people about it all the time but you don’t see that “scheme” as much any more. But I just got an email from someone suggesting I should do it with him. He was all excited because he claimed excitedly that he was going to make 2 million dollars per month leasing thousands of 800 numbers. I don’t think I have to say that nobody makes a million dollars a month marketing numbers.

It goes without saying that you should never advertise a rented or leased number. You wouldn’t advertise and build your business on a rented domain name for the same reason. It’s too tempting to take advantage of you. Even if they seem nice or professional it’s not a good idea. There’s always better options if you are creative.

And good luck Richard, I really hope you make your two million dollars a month.

“On behalf of Forest City Painters I want to Thank you and your staff for all your help. Being a small business in Canada, we are always looking for ways to increase our market and market share. As we were growing into different towns and cities, we felt a toll free number with a catch was our best bet. We first went to our local telephone company and were told that 800 numbers were almost impossible to get. Believe me it was somewhat dissappointing to us. Thankfully I found your service on-line and was able to easily search and find a number that suited our needs. Being the ever sceptic I placed the order thinking that I would get a number that I couldn't use in Canada or some other problem would arise. I still can't believe how smooth the process went. With all the info. you sent it was a breeze. The phone company was impressed that I knew what to ask for and they sent through the paperwork. It took a little while, so I sent you a quick email and again I was surprised you answered back promptly and put my mind at ease. Thank you again for all your help and I will gladly refer to anyone that needs help in this field.”

“Thank you so much Rita and 1-800 Marketer! You simplified the process of obtaining a toll free number for a non-technically savvy person like myself and made it easy. We love our new number, we love the low price and we love the superb customer service that your company provided to us. This will enable us to attract more patients to enroll in our clinical trials to spread the word that clear skin is possible.”

“Bill Quimby is the President and founder to www.tollfreenumbers.com I have been purchasing vanity phone number from his site for years and his service is the best of any kind out there. His search engine to find the exact phone number you are looking for is second to none. Bill's and all his staff customer service is excellent and they always go the extra mile to help you find what you are looking for. My advice is first that every business needs a vanity number and second piece of advice is to go directly to www.tollfreenumbers.com to get it. Best Price, Best Service and Best Guarantee! Thanks Bill for all your help over the years!”