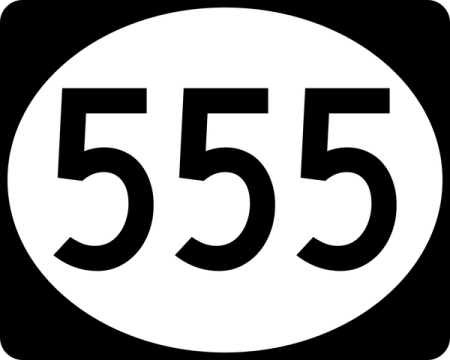 Despite what you've seen in movies, 555 is not a valid exchange in any local or toll free area code in North America, EXCEPT for "800".

It's a funny story why it's only available in 800-555-****. You have to understand the early history of toll free a little. AT&T invented toll free numbers in May of 1966 when they were THE phone company. When their long distance was broken up and other companies started offering long distance they just gave them out by exchange (blocks of 10K #s) to different phone companies, just like they did local numbers.

A Canadian phone company requested the 555 exchange. At first AT&T said no, because that's not a vailid exchange for us. The Canadian company said it's not for you but we can use it. Eventually they got the 555 exchange and were giving them out to Canadian customers, when they created the SMS/800 database to make numbers portable and issue numbers individually. They were grandfathered in, and after a period of time were able to be transferred and used the same as any other number.

They are obviously very hard to get and valuable because they're so unique. They decided not to allow them though when they added 888's in 1995, and have blocked both 555 and 911 in every new toll free area code introduction.

“As a technology consultant, I'm very aware of the sales spin" normally put on tech products, and I tend to buy technology products only when I know what I'm getting into. You guys make that possible by allowing me to control the toll free buying process instead of being railroaded by the service provider. You have a FANTASTIC service!"”

“Great service, awesome search engine. If you cant find a number, they will find you one. Competitors, cant even come close. Don't even think twice, about using their service. Put yourself on the map now.”

“TollFreeNumbers.com provided me with an efficient way to obtain a number that my company needed. It was affordable and quick. They handled my service with professionalism and my company will be back for more numbers.”